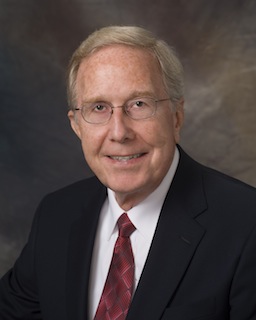 Pastor Jim has been pastoring at the Grace Brethren Church of Columbus, Ohio since 1968.  During those years he has shared the oversight of the ministries of the church, the initiation and development of the Grace Brethren Christian Pre & Elementary Schools & Worthington Christian High School, the Theological Practicum (an institute designed to train men for pastoral ministry), Worthington Bible Institute, and two Missions Boards which seek to plant and mature new churches.  Presently 200 full and part-time partners staff the many ministries of the church.    In addition to the church ministries,  many people living throughout Ohio and area states recognize Pastor Jim’s voice because of the Right Start daily radio broadcast which has aired for 40 years.

Throughout his 50 years of Gospel ministry, he has enjoyed serving in many leadership opportunities within the National Fellowship of Grace Brethren Churches, including the Brethren Board of Evangelism, the National Youth Board, the Board of Christian Education, the Brethren Home Missions Board and currently is serving as Chairman of the Board of Trustees for Grace College and Grace Theological Seminary.    He served his Fellowship of Churches as their conference moderator in 1977 and was again elected moderator for the National Conference in 2000.  His peers elected him Chairman of the National Association of Grace Brethren Ministers and in 2002 presented him with the Lifetime Achievement Award.

Pastor Jim loves to study and teach the Bible, especially the prophetic passages which outline God’s plan for the future of mankind’s history.  Introduced to Israel in 1969, he and his wife Triceine saw how visiting the lands of the Bible benefited those believers who desired to grasp its message and meaning.  They have teamed together to lead 34 tours to Israel, Egypt, Jordan, Greece, and Rome.  They find great joy in watching the Scriptures come alive for those who travel with them.  Twice, the Israel Ministry of Tourism has honored him with a Distinguished Service Award.

They have an acute passion for Gospel evangelism and have traveled throughout the states, Africa, and Europe to encourage missionary families.  Many of these are former members of the churches in Columbus and Iowa where they had served with the Custers.

Jim and Triceine are the parents of two sons and a daughter and have ten grandchildren. Pastor Jim is the living collage of all these precious influences orchestrated by the grace of Jesus Christ.