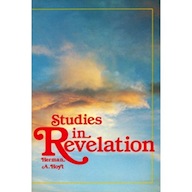 This chapter-by-chapter commentary on the final book of the Bible reveals a three-fold picture of Christ in the book.

Herman A. Hoyt (1909-2000) was one of the founding professors at Grace Theological Seminary in 1937. In 1962, he became president of Grace College and Seminary, a position he held until his retirement in 1976. His area of specialty was New Testament and Greek, but over the years he taught Hebrew, Old Testament, theology, and homiletics. A prolific writer, his work included major expositions of the books of Romans, Hebrews, and Revelation, along with Brethren ordinances and beliefs and eschatology.

Your shopping cart is empty.

You can purchase a copy of today's message, Being Transformed To Be Like Jesus, unsegmented for broadcasting and in its entirety, for just $7 on a single CD or $2 as an MP3 download.

For a limited time, you can order the complete current series, The Righteousness Of Jesus Christ, on a set of 8 CDs for the special price of just $32, or as a 8-MP3 ZIP file download for $13. This special offer ends Tuesday, November 24th.